Dr. William H. Foege, a transformational leader in global health, was honored as a recipient of the Ivan Allen Jr. Prize for Social Courage during events held March 14-15, 2012.

Dr. Foege is an American epidemiologist who worked in the successful campaign to eradicate smallpox in the 1970s. He became chief of the Smallpox Eradication Program of the Centers for Disease Control and Prevention and was appointed director of the CDC in 1977. He attended Pacific Lutheran University, received his medical degree from the University of Washington, and his master's degree in public health from Harvard University.

In 1984, Dr. Foege and several colleagues formed the Task Force for Child Survival and Development, a working group for the World Health Organization, UNICEF, The World Bank, the United Nations Development Program, and the Rockefeller Foundation. Its success in accelerating childhood immunization led to an expansion of its mandate in 1991 to include other issues that diminish the quality of life for children. 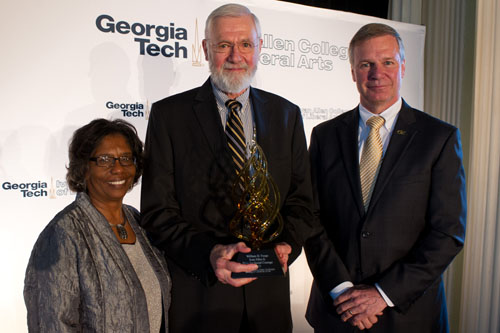 Dr. Foege has championed many issues, but child survival and development, injury prevention, population, preventive medicine, and public health leadership are of special interest, particularly in the developing world. He is a strong proponent of disease eradication
and control and has taken an active role in the eradication of Guinea worm disease, polio, and measles and the elimination of river blindness. By writing and lecturing extensively, Dr. Foege has succeeded in broadening public awareness of these issues and bringing them to the forefront of domestic and international health policies.

Dr. Foege has received many awards, holds honorary degrees from numerous institutions, and was named a fellow of the London School of Tropical Medicine and Hygiene in 1997. He remains active in many organizations and is on the Advisory Board for the Emory University Global Health Institute and Professor Emeritus, Rollins School of Public Health at Emory. The author of more than 125 professional publications, Dr. Foege’s recent book, House on Fire (University of California Press, June 2011) tells the story of how smallpox, a disease that killed, blinded, and scarred millions over centuries of human history, was completely eradicated in a spectacular triumph of medicine and public health.