One of the nation's most respected and visionary leaders on defense and national security, former United States Senator Sam Nunn, was the inaugural recipient of the Ivan Allen Jr. Prize for Social Courage presented by the Georgia Institute of Technology on March 15, 2011.
“While some individuals talk about achieving world peace, Senator Nunn has actively pursued this vision and created a legacy that continues to reap results long after his exit from public office,” said President G.P. "Bud" Peterson. “The Ivan Allen Prize for Social Courage stands as the preeminent award offered by Georgia Tech and underscores the mission we have in Georgia, the nation, and the world.”
Senator Nunn is co‐chairman and chief executive officer of the Nuclear Threat Initiative (NTI), a charitable organization working to reduce the global threats from nuclear, biological, and chemical weapons. He served as a United States senator from Georgia for 24 years (1972‐1996) and is retired from the law firm of King & Spalding.
During his 24‐year tenure in Congress, Senator Nunn served as chairman of the Senate Armed Services Committee. In this capacity, he was the guiding force in reshaping American policy toward the former Soviet Union in the wake of the break‐up of the Soviet Empire. The Nunn‐Lugar Cooperative Threat Reduction Program, which provides assistance to Russia and the former Soviet republics for securing and destroying their excess nuclear, biological and chemical weapons, has been hailed as “the most significant congressional achievement in nuclear affairs since the dawn of the nuclear age.”
Although Senator Nunn retired from the U.S. Senate in 1996, he has continued to provide leadership against the dangers of terrorism and nuclear weapons. Together with fellow Georgian and CNN founder Ted Turner, he established the Nuclear Threat Initiative (NTI), a nonprofit, nonpartisan organization that focuses on reducing global threats from weapons of mass destruction. NTI will be celebrating its 10th anniversary in 2011, having made significant achievements with a lasting legacy to make the world a safer place.
NTI triggered significant U.S. and global funding for securing loose nuclear bomb‐making material through its bold initiative to remove vulnerable materials from Yugoslavia. The organization also conceived of and helped create the first international organization focused on nuclear security, the World Institute for Nuclear Security. Most recently, NTI, through the generosity of Warren Buffett, supported the development of an international nuclear fuel bank, which gives countries an alternative to producing their own nuclear fuel and avoiding the introduction of technology that can be used either for peaceful reactors or for creating bombs.
In an effort to galvanize global support for and action on the vision of a world free of nuclear weapons and the urgent steps needed to reach that goal, Senator Nunn joined former Secretary of State George P. Schultz, former Defense Secretary William J. Perry and former Secretary of State Henry A. Kissinger. Their Wall Street Journal op‐ed in 2007 reframed the terms of the global debate on nuclear issues. 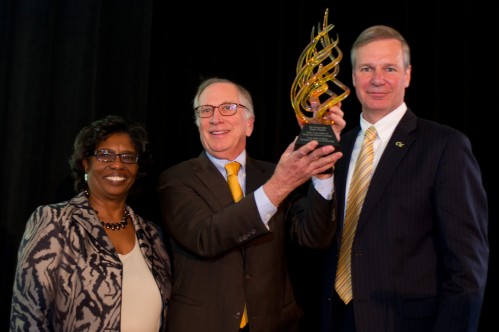 Senator Nunn serves as chairman of the board of the Center for Strategic and International Studies in Washington, D.C. In addition to his work with NTI and CSIS, Nunn is also co‐chair of the Euro‐Atlantic Security Initiative (EASI), an international commission sponsored by the Carnegie Endowment for International Peace, aimed at identifying the challenges and opportunities for strengthening cooperation in Euro‐Atlantic security.
Raised in the small town of Perry, in middle Georgia, he attended Georgia Tech, Emory University, and Emory Law School, where he graduated with honors in 1962. After active duty service in the U.S. Coast Guard, he served six years in the U.S. Coast Guard Reserve. He first entered politics as a member of the Georgia House of Representatives in 1968.
During his tenure in the U.S. Senate, Senator Nunn served as chairman of the Senate Armed Services Committee and the Permanent Subcommittee on Investigations. He also served on the Intelligence and Small Business Committees. His legislative achievements include the landmark Department of Defense Reorganization Act, drafted with the late Senator Barry Goldwater,
and the “Nunn‐Lugar” Cooperative Threat Reduction Program, which provides assistance to Russia and the former Soviet republics for securing and destroying their excess nuclear, biological, and chemical weapons.
Senator Nunn is Distinguished Professor in The Sam Nunn School of International Affairs in Georgia Tech’s Ivan Allen College of Liberal Arts.  He received an honorary Doctor of Philosophy from Georgia Tech in 2008 and was the recipient of the Ivan Allen Jr. Prize for Progress and Service in 2004.  He is a board member of the following publicly‐held corporations: Chevron Corporation, The Coca‐Cola Company, Dell Inc., and General Electric Company. He is married to the former Colleen OʹBrien and has two children, Michelle and Brian, and two grandchildren.

A Tribute to Senator Nunn

A video tribute to the life and work of Senator Sam Nunn.